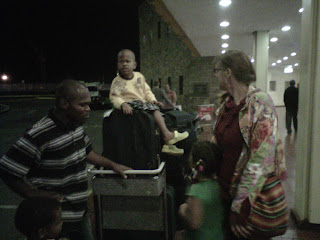 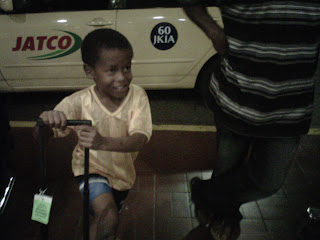 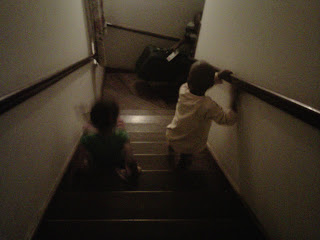 We arrived in Nairobi on September 2 only a few days before the start of school. While still feeling like a zombie in a dream cloud rather than an excited child of the Diaspora returning to the motherland, we began settling into new life here. The next day it was time to buy food, but I was too tired to make good judgments on what to buy and trying to decide which commodities would be similar in quality than what I was used to buy while jet lagged meant observation was futile. Finally, we came to the outlet where we would purchase school uniforms for the children.

From a distance I could see a long, standing, line of eager parents and children waiting to get into the store. Like a true Ball I walked to the front of the line and handed my list of school uniform specifities to one of the tailors. "Oh no, you cannot come in until you are called," he said with both hands cupped forward in my direction. He motioned to the back of the line as I turned around with the children, grimly anticipating my fate. After about an hour and a half wait we were again standing in front of the entrance.

On the inside I was jumping excitedly as I clenched my uniform list. Without it we would surely disappear in the seeming confusion that waited in front of us. To a westerner, even for a loosely, artistic person like myself, priding myself on rarely matching my socks and operating under a system of disorganized organization, what lay before my eyes looked chaotic and stressful.

...another 15 minutes wait at the entrance and we were called into the store. Inside, a friendly tailor with measuring tape draped around his neck motioned for us to come in. He began as most Kenyans do, speaking to me in Kiswahili, experiencing a moment of confusion and then figuring out that I am a muzungu (a foreigner. Usually attributed to white people). After we talked about my birth location and to which tribal group he assumed that I belonged, we began the process of school uniform acquisition!

Although I saw this as a sort of non-process in need of a bit of organizational management change, the tailor was well versed in this system of school uniform search. It went something like this; I would call out the first item on the list and he would disappear into the mass confusion and appear with the item that I requested. Between the time that I asked for the item and when he returned was about 15 minutes. On several occasions we needed a larger or smaller size. At the recognition of this he would disappear again and emerge with another size: another 15 minutes gone by. 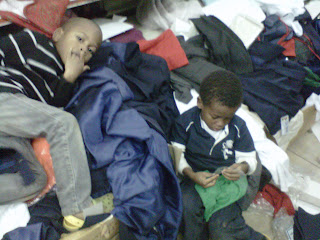 In the meantime the children were playing with the fallen clothes and school accessories and "climbing over the mountain." One is doing the pee-pee dance and both are crying for snacks: blood pressure rising. In the midst of all of this the desire to show my "muzunguness" became overwhelming. I decided to "fix" this situation. "Sir it would be so much easier if I simply handed you the list of uniform paraphernalia and you could simply bring it all back at once." "Oh no!" he said to me as if I had just asked him to go to the moon, "That's not the system. You will continue to ask me each item on the list and I will get it"...15 minutes passes. "Sir, I have 2 children. Can you at least get the socks when you get the gym shirt?" I shout out as he walks away. He obliges and purses his lips together, slightly irritated but still polite as ever and disappears behind the clothes for another 15 minutes.

There I was being a muzungu again. Judging another culture by my own cultural standards and trying to impose a different system after being in the country for only 72 hours. The truth is, this system has probably worked this way for a long time and after I leave it will continue. I leaned up against the counter still clenching my list, now wrinkled and tried to appreciate the value of experiencing a different method of accomplishing a task. If I really couldn't handle it I could just "Go home." At least that's what we as Bermudians suggest to well-meaning expatriates who move to our island and do the same. The counter response to this suggestion is to be called a xenophobe, those who are contributing to the financial demise of our island by chasing helpful foreigners with large money bags away. I imagined a group of gnome-like creatures running wildly across the map to the Cayman Island or elsewhere, away from angry looking natives.

Pain in my fingers from clenching the uniform list for 2 hours brings me back to my present reality. We have now begun the search for clothes for my younger son. Now I must closely guard the stack of school uniform stuffs for the 5 year old. It would be a travesty to lose one item in the shuffle and need to recover yet another item.

Finally, after 3 1/2 hours in total the tailor added up the cost of all of the items without a calculator. I on the other hand; blackberry in hand, was adding up the items along with him [although he finished before I did]. After paying for the school uniforms and gym clothes, we left the store and waved to the long line of eager parents also clenching uniform lists. It was now almost 6pm. Monday morning the boys got ready for school and looked cute as ever. One month later, the 5 year old misplaces his blazer at school… 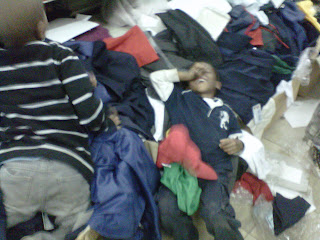 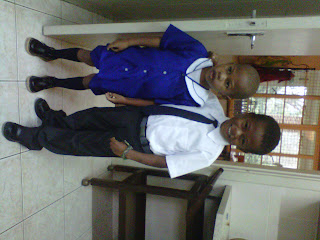 Posted by Burgess Family Adventures at 04:00